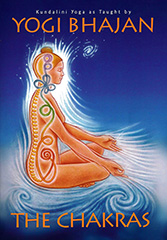 According to Yogi Bhajan, The Chakras are the keys to being human and being happy. In this book he defines, with both humor and subtlety, and also candor, the nature of your chakras, how they work, their interaction, projection and potency.

Each main chakra has its own chapter, giving it its rightful place in the grander scheme of things. Taken as a whole the chapters provide an anatomy of the human psyche - an anatomy which has taken thousands of years of research to define. Discovering the nature and gifts of your individual chakras will give you an understanding of the human psyche - how it works, how it manifests, how its details are found, how people behave, what we expect of them, what they expect of us.

By themselves, humans can be blinded by emotions, feelings, insecurities, but one thing remains: the progressive nature of the human to succeed, and such success cannot succeed if they are unable, intuitively, to understand the other person. That is where the science of the chakras came from.

If you can practice and understand these chakras and develop them automatically in your body so they become your companions, then you have seven friends.

OTHER PRODUCTS BY OR FEATURING YOGI BHAJAN:

Owners Manual for the Human Body_ebook
$10.55

Kundalini Yoga for Youth and Joy_ebook
$10.55

Foods for Health and Healing_ebook
$7.91

The Teachings of Yogi Bhajan_ebook
$8.79

The Ancient Art of Self-Healing_ebook
$13.19

Reaching Me in Me ebook

Infinity and Me ebook

Mantra - The Power of the Word ebook

The Teachings of Yogi Bhajan ebook

The Gift of Womanhood ebook

Success and the Spirit ebook