On August 26th, 1929, Yogi Bhajan (or Harbhajan Singh Puri as he was then called) was born an Indian prince - the male heir of a family whose holdings included the entire village of Kot Harkarn, now part of Pakistan. Everyone in the village looked forward to his birthdays each year. They were great celebrations, during which his weight in kilos was doled out to the poor in gold, silver and copper coins.

Yogi Bhajan was certainly not destined for an ordinary life. He was told by the village wise men that his life would profoundly impact millions of people. At the tender age of 18, when the sub-continent was being partitioned by the British into India and Pakistan, he led his entire village into Northern India. They arrived there penniless with virtually only the clothes on their backs. 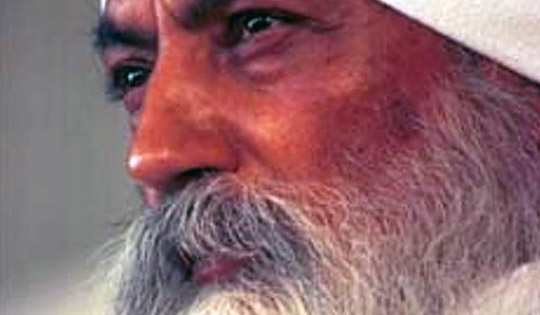 Amid the swirling, confusing, unfocused energies of the modern world, there is a light, a calm and a healing in the center of all things. -

Yogi Bhajan had mastered both Hatha Yoga and the much more powerful and ancient technology of Kundalini Yoga by the time he was 16 1/2 years old. In addition to his yogic practices, he finished college, gaining a Masters Degree in Economics, served as an officer in the Indian Civil Service, married, fathered three children, and was working as a Customs officer at Palim International Airport when he received an invitation to go to the University of Toronto in Canada to teach yoga.

Father of Kundalini Yoga in the West

It was the age of the hippy and the height of the Flower Power movement, and Yogi Bhajan had seen too many American and European seekers arriving in India in search of a spiritual identity and being exploited shamelessly – spending lots of money and receiving very little in return. He readily accepted the offer so that he could take the teachings to the West, and share the wisdom and the knowledge he had gained. He vowed to teach honestly and give the people the technology of Kundalini Yoga so that they could empower themselves. They did not have to become a disciple of anyone in order to progress on their spiritual path.

En route to Canada, he experienced every travelers dread when he lost his luggage. Then, when he landed in Toronto, he discovered that the university professor who had hired him to come had, tragically, just died. There he was, September of 1968, in a strange country with no job, only $35, and the clothes on his back.

In only three months there he made a huge impact - he established Kundalini Yoga classes at several YMCAs, co-founded a yoga centre, was interviewed for Canadian national press and television, and helped bring about the creation of eastern Canada's first Sikh temple, in perfect time to celebrate for Guru Nanak’s five hundredth birthday the following year.

In December, Yogi Bhajan received a personal invitation from a man he had known in India, to spend a weekend visiting Los Angeles. Although he had only intended to visit LA for one weekend, he changed his mind. When he saw the potential of the place, the huge numbers of young people looking for spiritual guidance – the generation whose destiny it was to usher in the new era of the Aquarian Age, he knew instantly that he had to stay there and teach them. He relocated there and so began the next phase of his life. 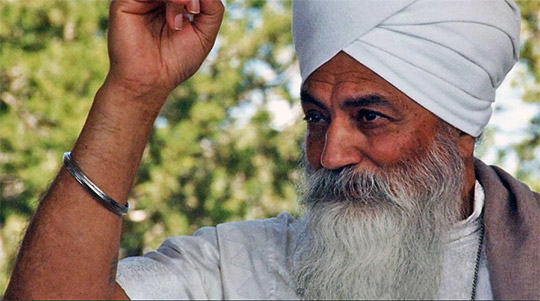 At his first public lecture on Sunday, January 5, 1969, at the Los Angeles East West Cultural Center, he explained to those early students that it was everyone's birthright to be healthy, happy, and holy. They had the ability to claim that birthright by regularly practicing Kundalini Yoga.

Word of a master from India teaching Kundalini Yoga spread rapidly, and soon busloads of young people from all over the West Coast flocked to the East West Cultural Center. This was too much for the woman in charge of the Center, and she asked him to leave. However, one of his students owned an Antique Shop on the corner of Melrose and Robertson and generously offered him the use of his showroom for classes.

Every night his enthusiastic students would move all the antique furniture before class, and put it back afterwards! Soon they decided to convert the garage into a permanent classroom, and this then became the first “Guru Ram Das Ashram”. The ashram classes were packed full every night.

From the very start, Yogi Bhajan made it clear that he had not come to get disciples, but to train teachers. He explained to them all that, in Kundalini Yoga, a person must initiate him or herself! He encouraged people to learn, and then to go out and teach others what they had learned.

By introducing what he called the “Yoga of Awareness” to the West, Yogi Bhajan had broken an ancient tradition of secrecy. These teachings were exclusively passed from teacher to student in a very selective and elitist way. To learn Kundalini Yoga, a student had to serve a Master, prove his/her humility, self-discipline and devotion, before the teacher would even consider teaching them.

Prior to he arrival in the West in 1968, this technology had never been taught publicly anywhere. It was even said that anyone who dared to reveal its secrets and teach it openly would not live to see their next birthday!

He defied that tradition because he could see no logic in keeping these teachings from the thousands of young people out there who were abusing drugs in search of higher consciousness. His was an alternative to the drug culture. He knew that his technology would give seekers a real experience of God within, and also help them to heal their mental and emotional problems - as well as their physical bodies damaged by the use and abuse of drugs.

Yogi Bhajan devoted his life to the democratization of spirituality, teaching to whomever was ready to listen and willing to practice. The way of life he taught his students was one of a vegetarian diet and early morning practice of Kundalini Yoga and Meditation.

Man of Many Hats or Turbans

During his time in the United States, Yogi Bhajan had the occasion to wear many hats, or turbans. He was a businessman, spiritual teacher and religious leader. He was awarded a Doctorate in the Psychology of Communication in the U.S. He was also a master of Ayurvedic healing and head of 14 U.S. corporations, including the computer company Sun and Son, Yogi Tea Company and Kettle Chips and his most successful business, Akal Security, which held many federal contracts and guarded the Federal Court House in Washington, D.C.

He was the only living Mahan Tantric, or Master of White Tantric Yoga. Through the healing that he performed he assumed the karma of those he helped and in so doing rearranged their auras, helping them to reach their truest selves and become compassionate, kind and caring people. He taught that happiness is the birthright of every human being. One of his favorite sayings was “If you can't see God in all, you haven't seen God at all.”

As the Siri Singh Sahib, or leader of Sikhism in the Western Hemisphere, he met with Pope John Paul II in 1983, and again in 1984, to discuss inter-religious dialogue. He also worked side-by-side with the Dalai Lama and the Archbishop of Canterbury. Sikhism is a “Dharma” or way of life that believes in equality and direct experience of the Divine, offering devotional practices to help each individual to achieve oneness with God.

Yogi Bhajan left his physical body at 9:05 pm MDT on October 6th, 2004. His passing took place at his home in Espanola, New Mexico surrounded by family and friends. The cause of death was complications due to heart failure. He was 75 years old.

Each soul has a role to play. Each human has something to say. May consciousness prevail so we can come through the veil of arrogance and ignorance to the joy and happiness of life. May we count our blessings to be beautiful, bountiful and blissful. -

Acknowledgement: This article is based in part on Kundalini Yoga Comes to the West by Shakti Parwha Kaur Khalsa