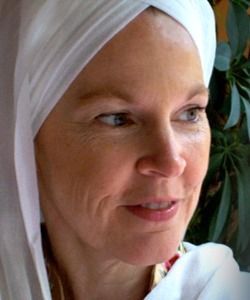 Hari Kirin Kaur / Joan Hanley has been a professional artist since finishing her BFA at Hartford Art School in 1976. The next few years of her career were spent between New York, at the School of Visual Arts or Columbia University, and Hartford, Connecticut, where she participated in Real Art Ways. It was during this time that she met her spiritual mentor, Yogi Bhajan.

"I studied and corresponded with him until his passing. He gave me the name, Hari Kirin Kaur which means the Creative Feminine aspect of God, and Kirin is a focused beam of light that can cut through the darkness."

In her beautifully illustrated book, Art and Yoga (2011), she succeeds in combining her two passions. This publication contains exercises to increase creativity for yogis and help artists with their creative flow, focus and intuition.

Her paintings and other art are in much demand. Recent Public installations include Office Hours, 360 oil paintings in the Dublin Ireland Immigration office, The Flag Project, a community expression of diversity in the State Legislature in Concord NH, Axis Mundi, a 40 day meditation with local teens on a toxic site in Wilton NH and Mud Mural, a collaborative organic Mural.

Hari Kirin Kaur also shows her paintings in one-woman shows at locations such as The Mariposa Museum, NH and The Open Center NY and Group shows in the Attleboro Museum MA and Liberty gallery Dublin Ireland. Her work has been reviewed in publications as diverse as CIRCA, Resurgence and Aquarian Times. She also lectures on her subject – at locations such as the Boston Museum of Fine Arts, Hofstra University, and the One Earth conference.

She was formerly a visiting professor of Contemporary Art History at Marlboro College VT, and an artist teacher for Vermont College and Maine College of Art. In 2007 she took Sikh vows and changed her name from Joan Hanley to Hari Kirin Kaur Khalsa. She lives in New Hampshire with writer Thomas Moore and their two children.

Below you will find our selection of products by Hari Kirin Kaur. Retail customers will also enjoy our FREE US Shipping.